ALL Visit to ANTI Festival, Finland

In late September 2018 Art Language Location (ALL) Committee members and artists Robert Good and Rosanna Greaves visited the 17th ANTI Contemporary Art Festival in Kuopio, Finland. The aims were to experience the festival and to explore the possibilities for future conversations, connections and collaborations. The trip was kindly sponsored by The Finnish Institute, London.

We set out on Friday morning full of anticipation and excitement for our visit. In January 2018 ALL hosted the exhibition PLACE: Relinking, Relating, Relaying at the Ruskin Gallery in Cambridge which was the culmination of 18 months’ collaborative exchanges with artists from Italy, Slovenia and Bosnia Herzegovina. This experience of working together with artists from abroad, with different agendas and different cultural perspectives was extremely positive, so for the past few months our ALL committee had been researching artists, organisations and locations to visit in Finland with a view to a follow-up collaborative project in the future. 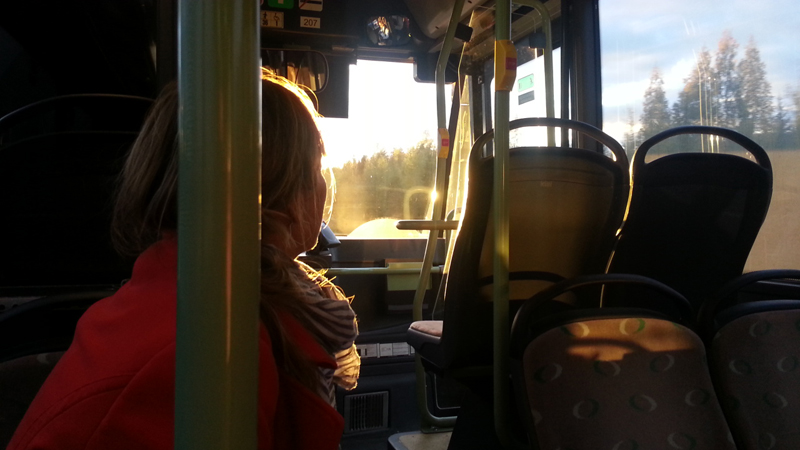 Descending the steps at Kuopio airport the air was bracingly fresh and it cooled considerably as the night wore on. The bus journey into town was admirably prompt (to the minute) and gave us glimpses of the vast network of lakes and woodland that make up the Finland countryside. Question: how many lakes do you think there are in Finland? Answer: an astonishing 188,000.

After a quick check-in at the hotel we headed straight our for our first Art Experience. I was very grateful for Rosanna’s efficiency at plotting our optimum course through the evening’s entertainments and ability to navigate our way around the city centre.

In fact all of the artworks throughout our visit were very easy to find. We were impressed by the clear, thoughtful design of the festival map and the quality of the ANTIZINE publication, which provided a space for experimental text-based artworks and writings. 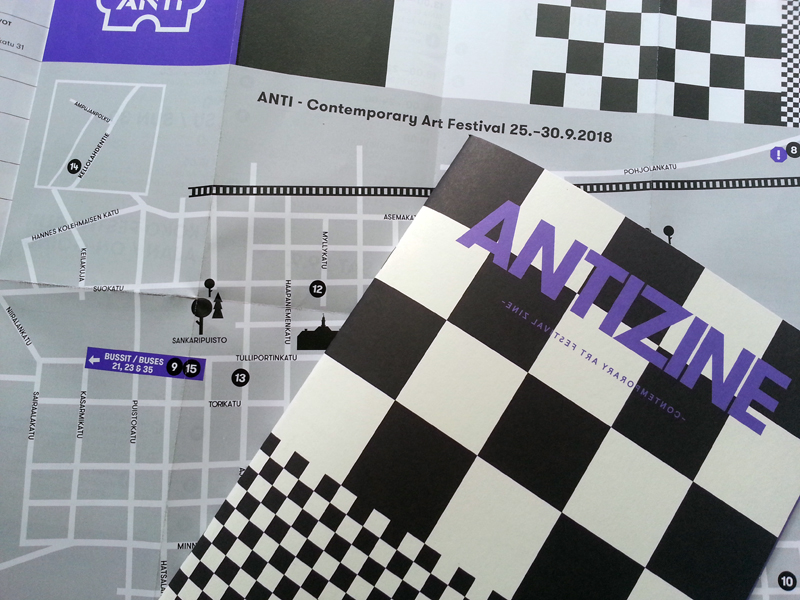 Every location had a distinctive sign board outside that you could see from a distance and home in on. We also liked the fact that there were Festival volunteers at each location to welcome us and provide information and guidance if we needed it. Our own ALL experiences of providing signage for artworks in narrow streets and difficult-to-find locations around Cambridge has sometimes been problematic. We have also debated for our ALL exhibitions whether public artwork should be left unsignposted, so that visitors have a purely unexpected encounter. Here in Kuopio, as overseas visitors to a new city, we definitely realised the value of clear signage to all the works!

So it was that our first port of call was Element Studio fitness club to see Wrestling Club by Anna Maria Hakkinen, Lotta Suomi and Emil Uuttu. I was intrigued by what I saw: movement and grappling that was not-quite wrestling, not-quite choreography, not-quite dance all set to an improvised live techno beat and interspersed with plenty of laughter and smiles from the participants. As a keen sports fan myself, this inversion of priorities – from competition and aggression to playful co-operation – seemed curious but delightful. 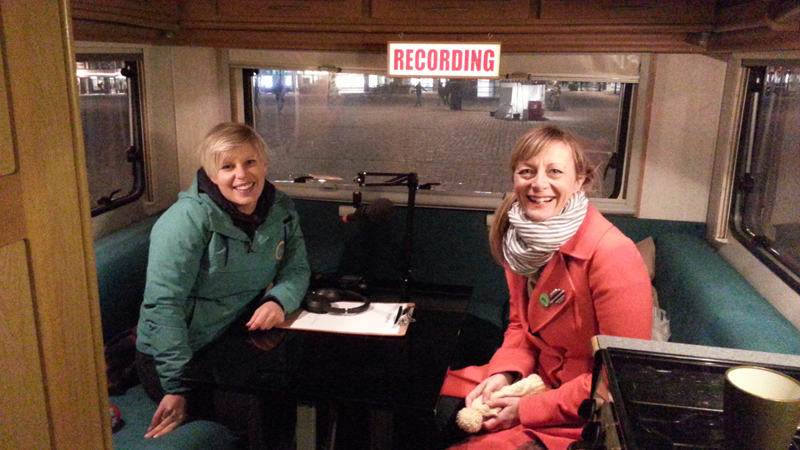 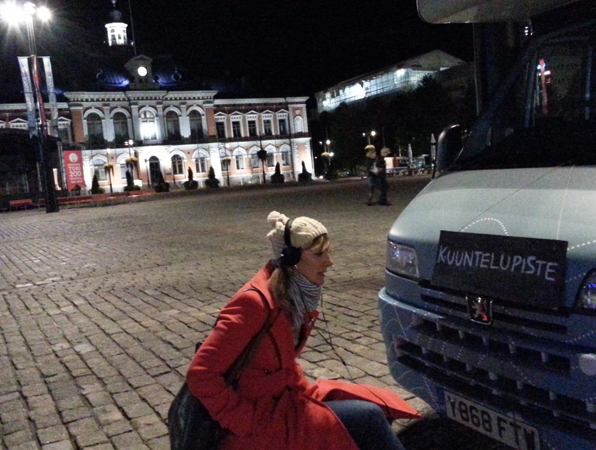 In the central market square guided by another black and white ANTI sign we found the Oh Europa motorhome lit up with its awning out, welcoming us in. Oh Europa is a project by Action Hero – a Bristol based collaborative duo comprised of Gemma Paintin and James Stenhouse. Over the last six months they have been travelling across Europe in their motorhome, recording love songs from the people they meet along the way in each place they stop. Attached to the front of the vehicle were two sets of headphones, we were given blankets and sat down to listen…

We heard a single voice whisper-singing an old song and although in another language the loss and longing in the voice conjured images of a sad lament. This was quickly followed by a group of young voices singing and giggling themselves through a pop song, coming together for impassioned harmonies and humming over forgotten lyrics. This of course was just one small snippet of the ever-expanding collection of songs, we would have loved to have stayed listening for longer if the weather had allowed, but Gemma welcomed us inside out of the cold. The beautifully done up van had a simple recording studio set up in the back between the seating booths. Gemma told us about the many people they had met and the plethora of songs they have collected, capturing obscure choral pieces unknown outside of a specific region, nearly forgotten folk songs, new songs recorded for the first time…

The project is trackable on their website, with maps, podcasts, photos and next stops. But the real poignancy of the work is both in the invaluable ephemeral archive they are building and in the located beacons, installed at boundary points, the edges of the continent, borders and geological edgelands, across Europe. Each beacon broadcasts the collected love songs 24/7 at these points of juncture, this seems like a poignant and important response to our time; indirectly reflecting on Brexit, migration, through the tenderness of the voice the love, joy and longing of human connection. A definite highlight of ANTI 2018.

After a delicious meal of local sausages and beer, our final visit of the evening was to see Tron by Hungarian collective Meetlab. Continuing the festival theme of ‘Play’, this was a giant outdoor laser projection of the cult classic arcade game Tron, in which players have to enclose their opponents in order to win the game. The foot operated controls and reversed wiring (press left to go right) provided an extra twist and we left feeling energised and entertained. 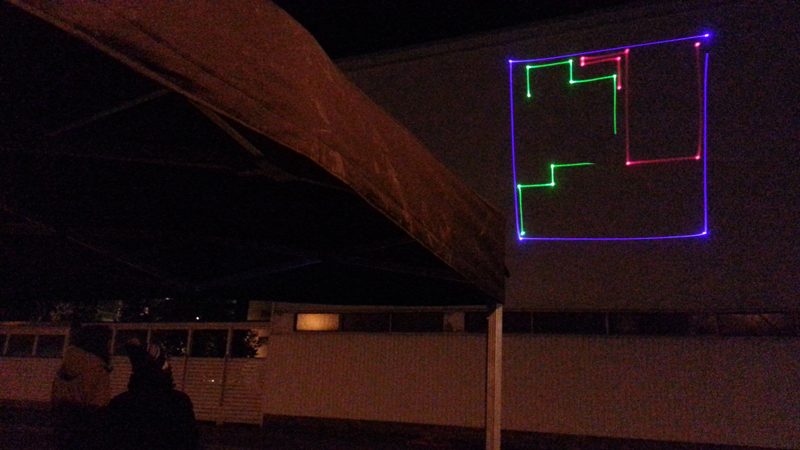 By a happy coincidence the Tron encounter was located outside the oldest bar in Kuopio, so we rounded off a most excellent first day by sampling the delights of arctic berry juice and hearing tales of Kuopio life from our friendly barman.

Saturday provided us with a full programme of artfulness, and it was lovely to walk around the city centre in the bright sunshine with a sense of anticipation (ANTIcipation?) and delight at our various encounters. 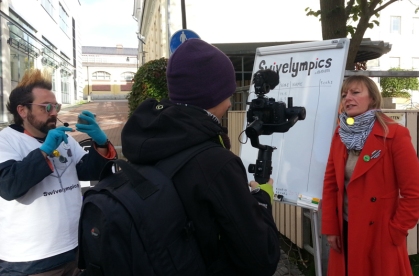 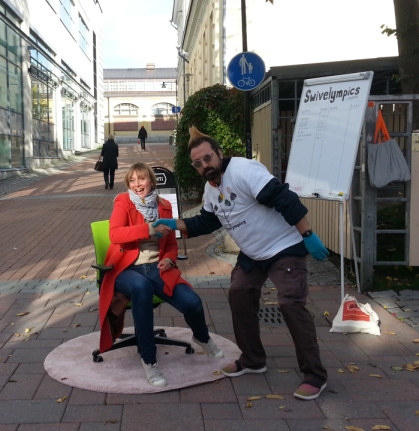 We called in briefly to the ANTI Pop-up Play Space before taking part in The Swivelympics, hosted by Richard Dedomenici from the UK. Participants were invited to complete as many revolutions as possible in a standard office chair whilst Richard provided a sports commentary to video, and I am pleased to say that Rosanna managed to break the Festival record with a magnificent 23 rotations. This was elemental playfulness. I liked the transposition of a moment of office ennui into a fully-realised ‘Olympic sport’ and it made me reflect on the curious arbitrariness (and ultimate absurdity?) of professional sporting endeavours. And yet I still wanted to win…

Following our rotational challenge we headed out to St John’s Church for a performance of Still Life devised by Signe Becker, Rosalind Goldberg and Ingvild Langgard.

Set in the modern St John’s church built in 1992, its abstract architectonic forms that create dramatic shards of light throughout the white interior provided a perfect setting for the work, which was designed around the shallow tiered steps by the organ.

A contemporary tableau vivant, Still Life was a durational performance starting with an almost still image of composed boulder-like sculptural forms of printed skin and limbs. The extended lead-in to the performance allowed for the audience’s focus to shift into a slower register, watching almost imperceptible movements of the breathing forms develop revealing real limbs extending from the printed flesh, holding and moulding into new formations. The mutations of the image continued to subtly develop, revealing more of the performers’ bodies and eventually reversing some of the printed skins into their inverted black polythene.

Expanding into choreography and contacting back into composed freeze frames, the rhythm of the work was drawn out by the swell of choral notes sung by the performers, drawing out the acoustic architecture of the church in an abstract secular communion. The final composition saw the performers shed their printed skins, standing tall and directly facing the audience. This moving site specific performance explored our perception of images and time, through communal experience and the body’s vocal resonance. 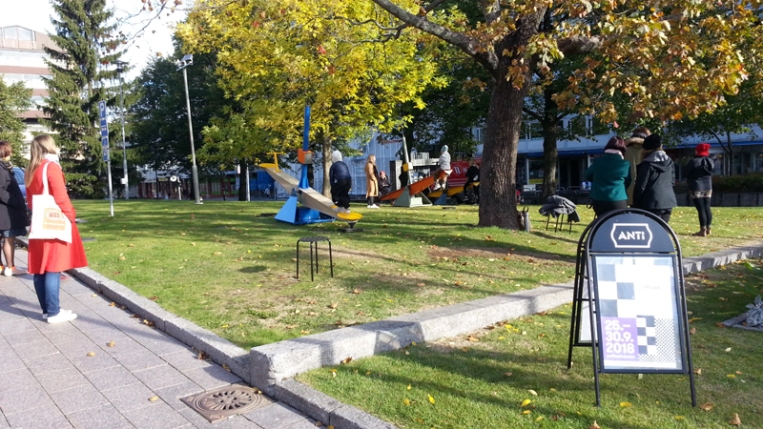 Back into the city centre, Pivot by Australian artists Madeleine Flynn and Tim Humphrey comprised a set of talking see-saws set up near the city hall. Visitors were encouraged to hold a conversation whilst gently tipping up and down. Whilst I enjoyed the playfulness of being on the see-saw (reminding me of visits to the park with my grandparents) I found myself unusually tongue-tied and unable to share my thoughts about Nietsche (the topic chosen for us by our automated conversationalist) in such a public arena. Thankfully Rosanna had plenty of questions to ask, and we left a little wiser as a result. 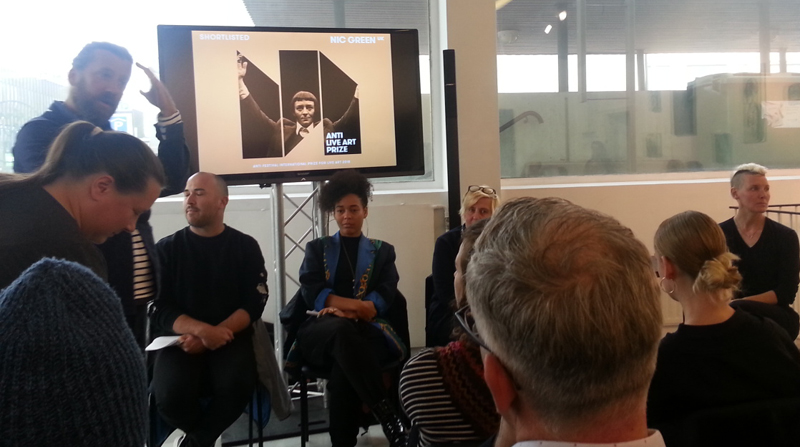 The main focus for the afternoon was a series of four artist talks by the shorlisted contenders for the 2018 ANTI Live Art Prize: All The Queens Men (Australia), Nic Green (United Kingdom), Jeanne van Heeswijk (Netherlands) and Sonya Lindfors (Finland). These are accomplished artists who are all engaged in transformational, empowering projects that use art as a force for social commentary and social change and I was struck not only by their achievements but also by their dedication and sheer hard work that must be needed to create such work.

After a short late-afternoon breather and some food, we headed out for the ANTI closing party and prize-giving. This was a lot of fun and it was good to meet Festival manager Elisa Itkonen and directors Johanna Tuukkanen and Gregg Whelan. We were very pleased to share a table with freelance media producer Marianne Finke and her partner Heikki, who had travelled from Turku for the festival. 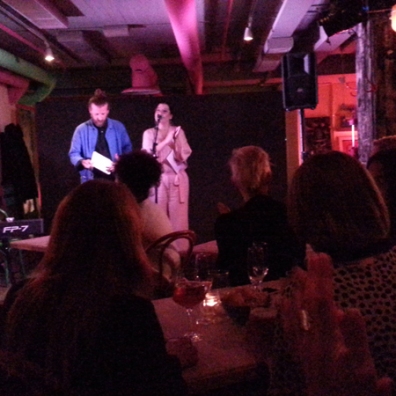 I was delighted that choreographer Sonya Lindfors won the ANTI Live Art Prize, which was a resounding vote of confidence for her infectious enthusiasm and determination to make change happen. Her acceptance speech was uplifting and roundly applauded, and points the way to a bright future.

After the bright sunshine of the previous day we were greeted by light rain for our final morning in Kuopio. We decided to wander down to the harbour, where with pleasing serendipity we unexpectedly came across a disused windmill facing us on an island just offshore: the very windmill that Rosanna had been researching online for a possible future video project and installation.

We left Kuopio and the ANTI Festival feeling refreshed and enthused. We were impressed by the professionalism, organisation and welcome that we encountered throughout our stay. Our visit was a perfect introduction to Finland and its contemporary art scene. We look forward to continuing our researches and to further visits to Finland. Already we are thinking about the possibilities that lie ahead.

Many thanks to: Jaakko Nousiainen, Head of Art and Culture at The Finnish Institute, London for making this trip possible and to the ANTI Festival team for their hospitality in Kuopio.